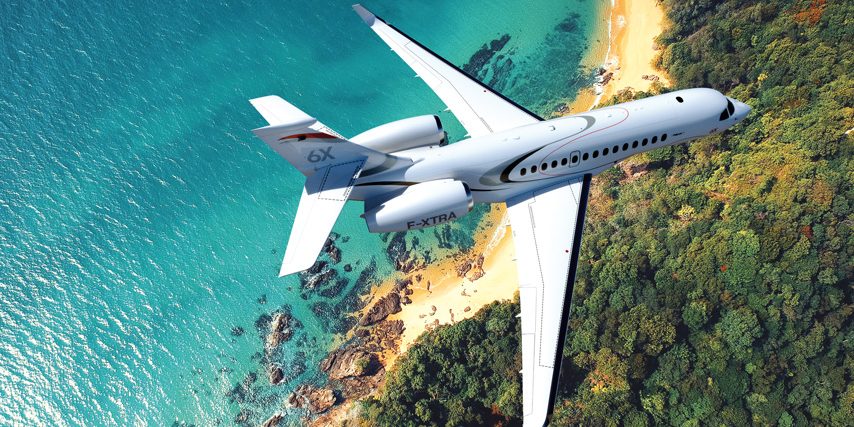 The new Dassault Falcon 6X is the latest of the series of business jets created by Dassault Aviation.

Manufactured in France, the Falcon 6X is exactly what we would imagine a private jet would be and so much more.

Falcon 6X took the world by storm in its debut at the Singapore Airshow in February 2019. The first flight of the Falcon 6X is due around early 2021.

The Falcon 6X is known to be the first wide-body private jet, which, combined with the renowned state of the art comfort, technology and safety of a Dassault Falcon, makes this aircraft stand out from the rest and in a league of its own.

With the jet being the longest-range in its class of business jets, the Dassault Falcon 6X has superior passenger comfort, space and mission flexibility.

Equipped with the finest and advanced digital flight control and cockpit control that the industry has to offer, this aircraft is far beyond its competitors and even more revolutionary and ingenious than the previous Falcons.

Read our tips and guidance on buying a private jet. You can also download our buyers step by step checklist that will include many considerations when buying an aircraft.

FEATURES OF THE DASSAULT FALCON 6X

The wide-body private jet is the widest and tallest currently in the market of business jets, allowing more space for privacy, more rooms, more area for relaxation or work and to move freely regardless of how tall you are.

The cabin space is enough to cater to three lounge areas along with other cabin necessities.

The best part about the Falcon 6X cabin is that the extremely sleek and stylish interior and finish are absolutely breath-taking, with no cost spared.

You also have the option of customising the jet to your specific requirements; you can literally create the space of your desire.

Want to make each and every flight of yours be a completely surreal and mesmerising experience? The Falcon 6X does exactly that.

With 30 extra-large beautiful windows and a contemporary skylight that will illuminate your cabin with natural light during the day and give you unprecedented views, these extra features will make the cabin look bigger and feel a lot less cluttered.

The cabin also allows passengers to control lighting according to their liking through the mood lighting features.

Just like it’s other features, the Dassault Falcon 6X has a highly futuristic and modern management system that can be controlled simply through a tap on your smartphone.

From controlling the ambience of your cabin to managing the entertainment system the cabin is equipped with, you can control everything from your smartphone.

Not just that, the aircraft also has something called FalconConnect which is a lighting fast broadband connection to keep you linked with the world throughout your journey.

The Falcon 6X features a new and advanced air filtration and circulation system, which makes your long flights a lot more comfortable and easier than in the past.

It has been designed specifically to minimise fatigue and discomfort and make the environment as pleasant and opulent as possible.

This system is also to cater to air quality that is 10x over the minimum requirement and a lot healthier than the ones used in other private jets.

The engine installed in Dassault’s Falcon 6X is the Pratt & Whitney PW812D engine, thrust 13,000-14,000 lbs. The engine has been built to ensure sustainability, unparalleled performance and guaranteed reliability.

It is meant to cater to fast and highflying along with being highly fuel-efficient (up to double-digit).

The PW812D engine also is structured to reduce noise to the maximum, along with being less difficult to maintain in comparison to other engines, which deducts downtime drastically.

This was an important factor to mention, as the pilot’s office built in the Falcon 6X isn’t like your average or standard pilot’s office.

The cockpit has been created using the most advanced and latest technology, including the latest generation of Dassault’s avionic suite called the EASy III. This system is award-winning and certainly the best of its kind.

The EASy III has many modernistic features including the ability to power up and power down all systems at the same time quickly. This system has made controlling for pilots a lot easier along with sparing more time to them for critical thinking.

Probably the most exciting feature about the Dassault Falcon 6X is the addition of the Digital Flight Control System, which has the ability to control and guarantee optimal efficiency and performance throughout the flight.

It is so smart and advanced that there isn’t constant need for pilot input and the system has the ability to control, to some extent, automatically and reduce the workload of the pilot drastically.

The digital flight system also has the ability to control hazards and maintain speed limits, but also makes flights extremely smooth sailing and copes with turbulence better than any other private jet.

The system not only performs extremely well on air but also highly efficient on the ground, as well in order to make takeoffs and landing rhythmic and hazard-free.

This feature is an absolute blessing for the pilots. It can be defined as an electronic flight bag that consists of apps and features, custom-built for each and every Falcon.

The FalconSphere allows the pilots and ops to manage their missions much better and more conveniently and also saves a lot of time and money on flight operations.

The FalconEye is a dynamic new addition to the Falcon 6X, which provides the flight crew with insight and awareness about unprecedented change in weathers and allow them to alter their course accordingly and timely regardless of whether it is day or night.

This feature has made travelling a lot safer even in areas with troubling airfields.

The wings of Falcon 6X have been constructed to be able to perform remarkably well both during high and low speed.

The flaperon installed in the wings of the Falcon 6X allows maximum control and smoothness during landing and takeoff, along with adding immense command during steep descents and ensuring safety.

The jet is capable of flying nonstop at Mach .85 for 9,445 Km, which in layman terms means travelling from Singapore to Moscow.

This is amazing for a private jet and you will be saving copious amounts of time, which you would otherwise have to lose due to stop-overs.

Due to its mission flexibility and ability to combat steep approach fields, the Falcon 6X allows ingress to many more airports than if you were flying by other competitor private jets.

Fields such as that of London City and Lugarno are difficult to approach for other private jets but the Falcon 6X is equipped to do so.

While there is no fragment of doubt that the new Dassault Falcon 6X is an absolute game-changer in the world of private jets and seems like the perfect private jet in all regards…as a rather sizeable investment, you might want to do your research beforehand and find out maximum information tips and guidance on buying a private jet first.

Once you go ahead and decide to buy the new Dassault Falcon 6X, you’ll quickly realise how difficult and convoluted owning and managing a private jet can be.

Therefore, as soon as you decide to buy one, you should find an aircraft management company such as KJET, who have certified aviation professionals under their wing to ensure that owning a private jet is as worry-free as possible, along with ensuring that your aircraft receives the best possible maintenance and operation.

After you register to an aircraft management company such as KJET, you will be assigned with an experienced aircraft manager who will literally take all your worries regarding your private jet away; from maintenance to administration, they deal with everything for you.